THE POOR CONNECTION BETWEEN INTERNET ADVERTISING AND NEWSPAPER WOES

Self deception is more damaging than lies told to us by others because it more strongly affects our perceptions and decisions. One of the biggest self deceptions in the newspaper industry today is that the Internet is striping newspapers of advertising dollars and is a primary cause of its economic woes.

There is no question that Internet is increasingly attracting advertising revenues. They reached $23.4 billion in the U.S. in 2008. Looking at the numbers more closely, however, one sees a different story. About half those expenditures are search and lead generation fees that don’t compete with traditional newspaper advertising. Search payments alone are the single largest category of Internet income and represent 40% of total online fees. 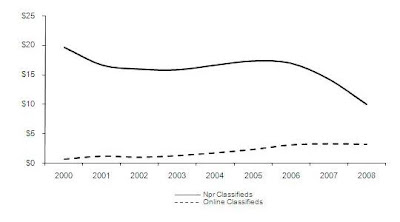 If one considers annual gain or loss of classified advertising in the two media one sees that the patterns do not indicate any substantial demand side substitution (advertisers switching from one to the other) because the figures do not rise and fall in the same patterns or in somewhat similar amounts. 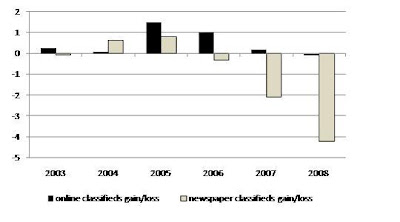 So why does the Internet constantly get the blame for newspaper woes? I believe it is because of it is just the newest in a series of threats to newspaper revenue. The Internet certainly is taking some money from newspapers, but it isn’t the worst culprit. The real competitor is direct mail and home delivery advertising that have taken much preprint and display advertising from newspapers in recent decades by delivering better household reach. That was compounded by the significant reduction in the number of large retailers in the late 1990s and 2000s. The development of the recession in 2007 and 2008 is currently playing the major role because newspaper advertising—especially classifieds—is more strongly affected by recessions than other types of advertising. But recessions come and go and there is no reason to believe that an advertising recovery will not accompany an improvement in the economy.

I don't mean to say that some former classified advertisers are not shifting to online sites, or starting their own company sites, allowing allows them to market more inexpensively. But newspapers can strive to get them back and to keep others from leaving by aggressively marketing to those people and firms and by creating effective print and online newspaper classified packages that provide more effective advertising responses for them.

The end for newspapers is not in sight and those who think that the $50 billion industry is going to collapse and disappear within a year or two because of Internet advertising are just not paying attention close enough attention to what is really happening across media industries.
Posted by Robert G. Picard at 11:19

Interesting stuff. Where do the figures come from?

The data come from the Newspaper Association of America and the Internet Advertising Bureau.

I think this analysis misses a key point by focusing on expenditures. According to newspapers, one key place they're losing classified revenue is Craigslist, and every time someone places an ad there instead of a newspaper, they're not paying for it (with a few exceptions). Another metric -- ad volume -- would be needed to reflect that.

Also, does the Internet Advertising Bureau include want ads posted on job sites, or is it tracking display ads? Newspapers lost want ads to the like of Monster, and that's been a factor as well.

I agree that better metrics would be helpful but the current ones do give a interesting picture and bring some assumptions into question.

Sites like Craigslist are a challenge, but even it is increasingly charging commercial firms for the type of newspaper classified advertising that was most profitable and brings the bulk of classified income.

The strategic linkages between newspapers and companies like Monster, and ownership of online classified advertising sites, are also reducing the impact of them on newspaper firm performance.

You're right; the Internet is just a small part of a larger and tragic story not well explained by journalists and others.

I saw a Wall Street presentation years ago in which economic activity was plotted against newspaper ad revenues across at least five recessions. Each time revenue bounced back -- advertising is cyclical, after all -- but never to the same level as before. This time, it began dropping before the recession.

Why is this so? In America, newspaper readership has been declining for all age groups since at least 1970, 25 years before the Internet acquired its present form and 35 years before its common use.

Yet newspapers continued to price retail advertising as if this wasn't happening. Consequently on an inflation-adjusted basis retail revenue peaked in the late 1990s and has been dropping ever since.

Some might say that owners reacted to having a sick golden goose by squeezing it ever harder until it finally stopped laying eggs...

The issue is that the Internet has created a different market with different structure. The technological efficiencies of online classifieds reduce the marginal cost of serving them to almost zero, and so the ads are free.

Craigslist and the like definitely have taken away newspapers' classifieds, largely because they require little or no payment. So naturally the dollar amounts won't match.

I don't argue that online classifieds are not taking some money out of newspapers and it is true the cost structures differ. But it is not a zero sum game where newspapers lose and the Internet gains.
Craigslist is not free for jobs ads in nearly two dozen of the largest cities and is now charging real estate firms in some. Blaming them for Newspaper woes is a cop out.

"About half those expenditures are search and lead generation fees that don’t compete with traditional newspaper advertising."

But a business has a finite pot of advertising/marketing/promotion money and if it now spends in a new area, the chances are it has to cut back in more traditional areas.

And the point James Geluso and others makes about papers now competing against free is fundamental.

The Times carried a great piece about the Craigslist effect last year: http://technology.timesonline.co.uk/tol/news/tech_and_web/the_web/article4681804.ece

Key quote: "They cry foul because they can’t work out how to compete against a company that won’t charge for its services."

Because Craigslist and others only need to charge in certain areas to build reasonably profitable businesses --- and can give so much away free --- the overall classifieds cash pot will fall.

The pot is smaller, and newspapers' market share is disintegrating. It's a lose, lose.

The connection between internet advertising and newspaper woes is very strong.

The classified market comparisons print vs. online should be made for cars, help wanted and real estate seperately.

Then you might get the impression, that classifieds in printed nespapers grew with the economy, especially the job market.

Cars and real estate have been loosing market share contiously after 2000 to the web, where advertisers can place their ads for only a small portion of what they used to spend for a printed ad.

If you try to find a connection, you shoul not only look on the revenue but also on the number of ads (listings).