New York Times Co., Gannett Co., Media General , and McClatchy Co. have all reported profits in the second quarter and the results have led to share prices doubling and tripling.

The developments must come as a surprise to those who saw the poor performance of recent quarters and convinced themselves that the newspaper industry is dead and gone.

Admittedly, the positive results in the past 3 months were achieved through restructuring, reducing news staffs to their 1970s levels, heavy cost cutting everywhere, and postponing reinvestments. But it shows there is still life in the industry and that the industry can be expected to recover in the coming year if economic conditions continue their current rate of improvement. As I have said many times, a industry with $50 billion in revenue is not going to ignore that revenue, close the doors, and disappear overnight.

Many have viewed the poor company performance in the past 2 years and then mistaken the steep concurrent drop in advertising as evidence of a general decline caused by long-term industry trends. In doing so, they have disregarded the impact of the economy on newspaper advertising and mistaken the dramatic drop in advertising as being an indicator of the industry's broader condition rather than the shorter-term results of 4 quarters of negative growth that have affected the economy as a whole. Some have also ignored the effects of corporate debt problems had on the industry's overall condition.

In multiple blogs and articles journalists and editors have pointed out that newspapers have fared worse than other media in the recession and used that the fact as evidence that the industry is a death's door. Two decades of research on newspapers during recessions, however, has shown newspapers typically fare worse because retail and classified advertising on which the industry relies are more affected by downturns than brand advertising (See post “The Credit Crisis, Volatile Markets, and Recession and Media” and the articles below). Obviously a lot of newspaper managers and journalists don't pay attention to research about their own business.

If one looks at the newspaper advertising expenditures over time (see Figure below), one sees that they fall with recessions and then recover. This pattern was especially evident from 1991 to 1993 and 2001-2003 when short downturns pushed newspapers into decline.

If one considers different category of advertising, it is clear that the classified advertising—which was a driver of growth in the 1990s—was significantly troubled after 2000, but recovered and spiked in 2005 (Figure 2). Its relative decline by comparison to retail and national advertising is probably the result of some substitution with the Internet, nevertheless newspaper classifieds produced $10 billion in 2008—3 times that of online classified. 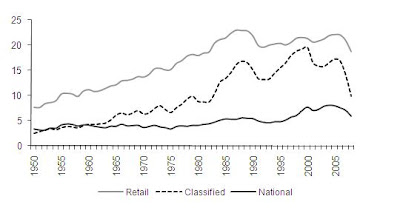 U.S. newspapers are in a mature industry with low growth potential once recovery from the recession occurs. Most companies will performance reasonably well after the recovery, but certainly some companies will have difficulties because of imprudent strategies and choices. Nevertheless, the industry as a whole will still remain in place producing revenue for many years to come.
It will do so because more than 45 million people are still willing to purchase a paper daily and retail advertisers still gain better results from newspaper advertising than from broadcast, Internet, and other forms of advertising.
Related Articles of Interest
Picard, R.G. & Rimmer, T. (1999). Weathering a Recession: Effects of Size and Diversification on Newspaper Companies, Journal of Media Economics, 23(4):21-33.
Picard, R.G. (2001). Effects of Recessions on Advertising Expenditures: An Exploratory Study of Economic Downturns in Nine Developed Nations, Journal of Media Economics, 14(1): 1-14.
Picard, R.G. (2008). “Shifts in Newspaper Advertising Expenditures and their Implications for the Future of Newspapers,” Journalism Studies, 9(5):704-716.
van der Wurff, R., Bakker, P. & Picard, R.G. (2008). Economic Growth and Advertising Expenditures in Different Media in Different Countries, Journal of Media Economics, 21:28-52.
Posted by Robert G. Picard at 16:00

Interesting text. You have a nice blog. Keep it up!